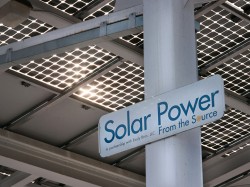 It is entertaining to watch as people drive in off of the I-5 freeway at the SeQuential Biofuels service station on McVay Highway in Eugene and climb out of their vehicles. At first they are often somewhat disoriented. It is  not your typical service station. SeQuential is an innovative company that produces fuel for vehicles predominately from off season farming of canola oil and agricultural and industry waste. With their vision of a more sustainable planet, they want to show what the service station of the future can look like.

As you look around you will see a passive solar building with a green roof composed of 5,000 plants housing the bakery, café, and  natural food store. A bioswale captures the rainwater run off from the site and filters it through special grasses that clean the runoff before it goes into the stormwater system. The roof over the fueling pumps is built of 224 solar modules, some with clear backing to allow the sunlight to shine through, which composes part of a 33.6 kilowatt solar electric system that also keeps you dry while you’re getting fuel. Energy Design has its own  product that creates a weather tight roof out of solar modules. Our design is one approach to building integrated photovoltaic (BIPV). Our design has the advantage of keeping the solar array cooler because there isn’t a  roof underneath the solar array trapping the heat. As a solar array heats up, the individual cells in the array have more resistance to the flow of electricity, causing the array to produce less power respective to its increase in  temperature. SeQuential’s solar array produces considerably more power per watt of installed solar modules than other solar arrays in the area that are mounted on roofs. At the same time our BIPV design reduces the  building materials needed to build the station. Stop by sometime and have a steaming cup of coffee and a fresh pastry while surfing the internet on your laptop through their free wireless internet service.

Vince worked with me to be sure everything needed was completed prior to installation and everyone at Energy Design was easy to communicate with and patient when answering my questions.