Lane Electric “flipped the switch” on Oregon’s first electric cooperative Community Solar Project on December 28, 2015. “The 25kW, 84-panel solar system was in the works for almost a year” says Dave D’Avanzo, Manager of Member Services for Lane Electric. Lane Electric is the first co-op to offer community solar to its members. 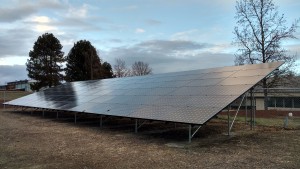 Renewable energy, specifically solar, is not new to the co-op. They have offered rebates to their members for home and business-based solar installations since the mid-90s and in 2012, Lane Electric partnered with King Estate Winery and SolarCity to install a 1 megawatt solar system consisting of over 4,100 panels on a parcel of land donated by the winery.

The co-op based community solar project is projected to generate approximately 38,000 kilowatt-hours annually which is equivalent to the energy use of two average households in Lane Electric’s service area. Subscription costs for the output from a half-panel is $600 and $1200 for the output from a full-panel. Lane Electric members have the option of financing the cost over 12-months on their electric bills. Subscribing members can realize a credit on their electric bill of between $3 and $5 per month depending on the sun’s rays.

I would highly recommend Energy Design for commercial solar electric installations. Not only did they complete on time, but the system performs better than projected and attracts extra business to our site because of its elegance and original design.